Richard Meier is a USA citizen born in New Jersey in 1934. He studied architecture in the Cornell University and then worked for other famous architects such as Skidmore and Marcel Bre. Meier is considered one of the most brilliant architects of the XX century due his noticeable minimalist style that he expresses through houses and museums he designs. Besides that, he also worked in some sculptures or various designs. In 1984 Meier won the Pritzker price with a project that included a rational use of the geometry, an intelligent use of the natural light, and a soberb use of the colour white. 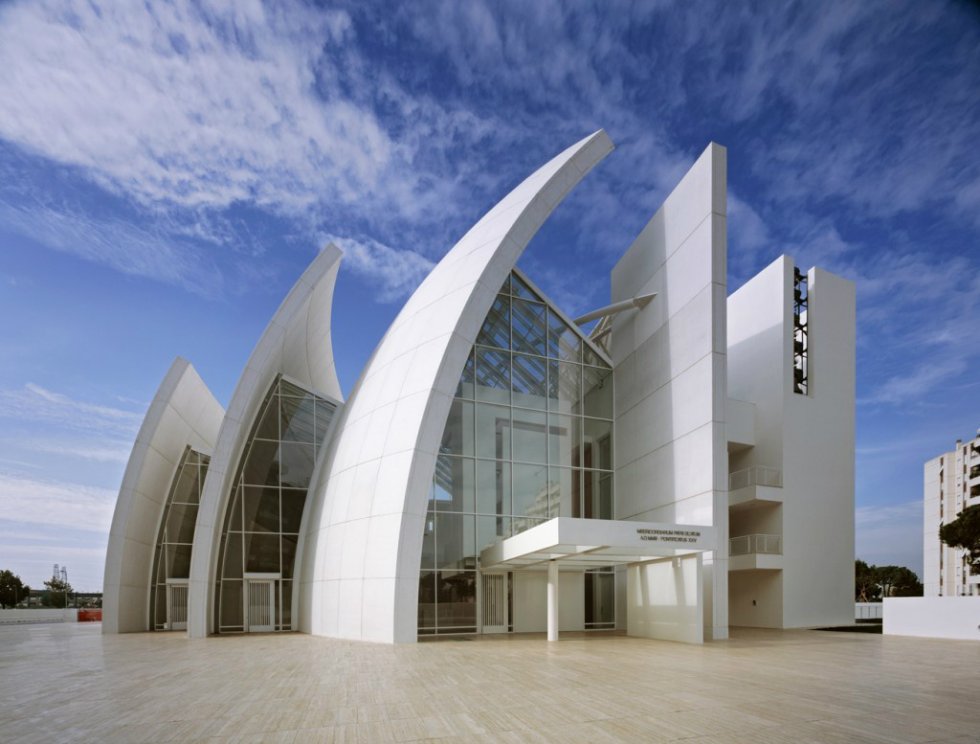 The image shown at the left is a church designed by Richard Meier. It’s known as the Jubilee Church or «Chiesa di Dio Padre Misericordioso«. This building located in the centre of Rome has two functions, first of all the obvious: a Catholic Church; but it also is used as a community centre. Its peculiar design is meant to represent a ship with the curved walls as if they were the sails. However, it also serves a function: to prevent water leaks and to control the internal peaks of heat.

«Rome has not seen a modern building in more than half a century. It is a city frozen in time.»

Rome, capital of Italy, is worldwide known for its architecture, art, mythology, history, etc. As Meier said, Rome in fact is a city frozen in time: the city is built on an ancient base. Every building has years, even centuries, of history. All this comes from the fact that the Romanic civilization were brilliant architects with unique and everlasting buildings such as the Colosseum, all the theatres, churches, cathedrals, castles, between others.

But the real question is why don’t they upgrade or modernize the city? Well, like it or not, Rome has a really large income because of the tourism that goes there to visit those museums, theatres or whatever since those are the stamp of the city. What architects are trying to do with this historical city is preserve its own beauty that it has gained during all the past centuries. If there was the case that nowadays we started a new project in Rome, the result would be a mix of styles that would break the atmosphere created in the past, the beauty reached would disappear and wouldn‘t create more attentions to tourists.

In conclusion, Rome is unic because of its architecture and histry, any change would affect its atmosphere and worldwide repercussion. That’s why it has become a frozen city.